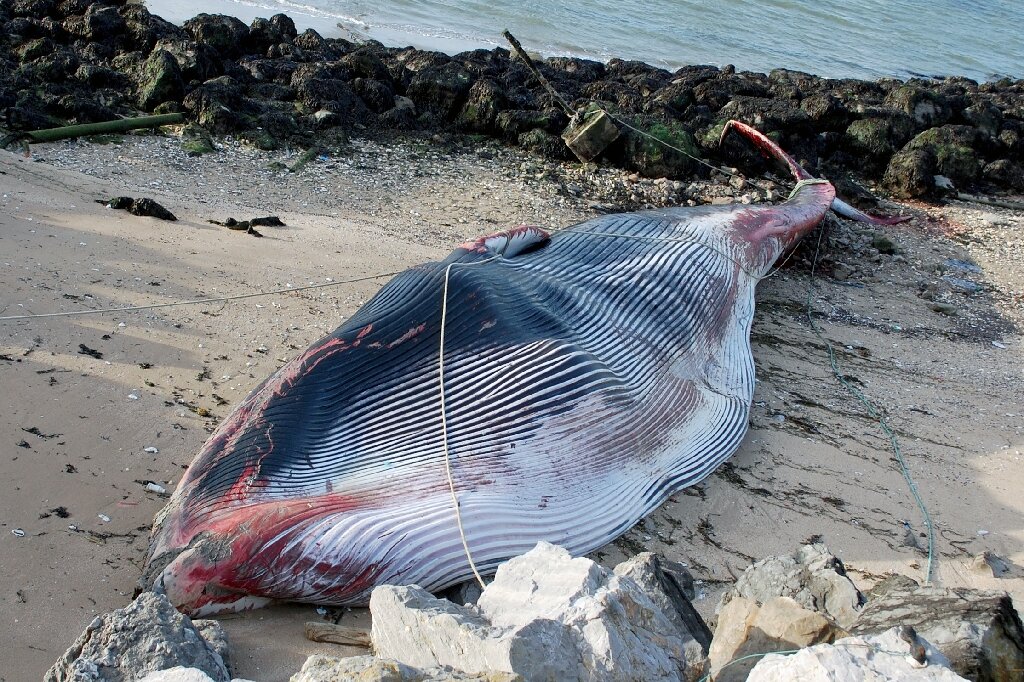 The Order Whale is an order of aquatic mammals that includes whales, dolphins, porpoises, sperm whales, and narwhals. Based on their biological characteristics, they are divided into two suborders: baleen whales (Mysticeti) and toothed whales (Odontoceti). Regardless of the suborder, these animals are facing extinction in different ways.

According to the International Union for Conservation of Nature’s list, 14 of the 89 extant whale species are currently endangered or critically endangered. Specifically, there are 5 species of whales, 7 species of dolphins and 2 species of porpoise.

Because of their high fat content and easy availability, the North Atlantic cetacean was the main prey of the 18th and 19th centuries. Its English name is North Atlantic “Right” Whale. The word “Right” comes from the idea: they are “suitable” species for hunting because they swim close to shore and easily surface after being killed.

Today, the total number of extant cetaceans is only about 500, with 400 in the northwest Atlantic and less than 100 in the eastern North Atlantic.

Although laws are now enacted to keep them out of poaching, they still die from accidental entanglement in human fishing gear or collisions with ships.

Like the North Atlantic cetacean, the North Pacific cetacean is also a highly hunted “Right Whale”.

Currently, there are less than 1,000 individuals left in the North Pacific cetacean worldwide. Especially in the Northeast Pacific, around Alaska, this species has been almost completely extinct with only about 30 to 35 individuals and 6 female whales left.

Found in almost every ocean on Earth, but because of their thin skin and low fat, they are not a preferred target for whalers.

However, by the 1950s, as other baleen whale populations were gradually depleted, Sei whales began to become an alternative target. To date, the number of individuals in the remaining Sei whale population is only approximately 30% of what it was before the 1950s, leading the International Union for Conservation of Nature to list them as endangered. .

The blue whale is the largest known animal with a length of over 30 meters and a weight of about 200 tons.

Before the whaling movement in the 19th century, blue whales were present everywhere on Earth in quite large numbers. However, between 1868 and 1978, more than 380,000 blue whales were killed, causing their numbers to drop dramatically.

Although blue whales are still found in many places today, with a “population” of only 10,000 to 25,000, they have been listed as endangered and in need of protection.

Gray whales are divided into two distinct populations in the eastern and western North Pacific. Commercial whaling has severely reduced the numbers of both populations. However, the population in the east is still considered better with about 27,000 animals. While the remaining population in the East Asian coast area is only nearly 300.

The good news is that numbers in both populations have been showing signs of increasing over the past few years, and the Wildlife Conservation Union has also moved them from the critically endangered list to endangered.

The Vaquita Dolphin belongs to the porpoise family and is also the smallest species in the order Whales.

With a length of just over 1.5m, weighing from 30 to 55kg, this animal was only discovered by scientists in 1958, only in the northern Gulf of California.

Unfortunately, the number of Vaquita dolphins has dropped from 567 to 30 in just 19 years, from 1997 to 2016. Without timely recovery measures, it is very likely that the Vaquita dolphin will be completely extinct. strains within the next decade.

True to its name, this is the only dolphin without a dorsal fin, belonging to the porpoise family, found in the Yangtze River region and off the coast of East Asia. The biggest threat to this animal so far is habitat loss.

As the areas around where they live are gradually becoming industrial and densely populated areas, over the past 45 years, the number of individuals in the finless dolphin population has decreased by about 50%, and even more so. 70% in the Yellow Sea area between Korea and China.

Previous articleBecome a billionaire at the age of 87

Next articleTragedy of 3 girls who were wrongly given